Prohibition was intended to improve the lives of Americans, and to protect Americans from the negative effects of alcohol abuse. Prohibition officially went into effect on January 16, 1920.  It didn't change America’s desire to drink alcoholic beverages, but instead created a large wave of organized crime.  People smuggled the alcohol into the country or made it themselves.  Gangs worked their own alcohol distilleries and paid officers and politicians to ignore their illegal work.  Gangsters bootlegged alcohol into the United States from Mexico and Canada.  There was a disregard for law enforcement and respect for the law dropped dramatically (Richard C. Hanes).  Advocates of Prohibition were called “Drys”, and opponents of it were called “Wets”.  One major player in the Prohibition era was Al Capone.  He is one of the most infamous criminals of all time. Government agents worked endlessly to stop the transport of illegal alcohol.  Unfortunately, the public’s desire for alcohol was too strong.  Secret drinking establishments called speakeasies attracted eager “Wets” who longed for alcohol.  Prohibition caused unrest in America’s society, and America just could not reach an agreement when it came to the ban of alcohol. It wasn't until 1933 that Prohibition was finally repealed (Werner, Levy, Roberts, Taylor, pages 229-30).

The following video is a biography of the infamous gangsters of all time, Al Capone.  The video documents many important events that took place during Capone's life.  Before going to jail, he had accumulated a personal fortune of nearly $100 million and caused numerous murders.  He grew up extremely poor and was expelled from school at the age of 14 for hitting a female teacher.  He never returned to school.  After this, his life of crime exploded into something uncontrollable.  When Prohibition went into effect, Al Capone did many things to please his Prohibition-opposed customers, including bootlegging whiskey.

"All I ever did was sell beer and whiskey to our best people. All I did was to supply a demand that was pretty popular." -Al Capone 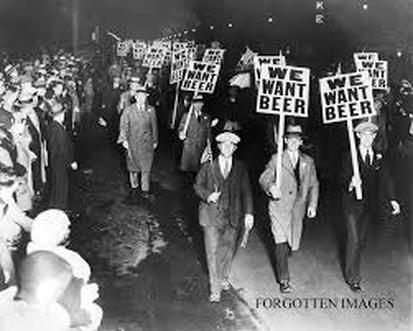 This is a picture of a protest by opposers of Prohibition. In this rally, men are marching the roads to attempt to get the ability to purchase and consume alcohol back. There is a large crowd, so the protest clearly drew a lot of attention.