Fundamentalism and the Scopes Trial

Fundamentalism and modernism clashed in the Scopes Trial of 1925.  The theory of evolution, developed by Charles Darwin, clashed with the description of creation found in the Bible.  In Tennessee, a law was passed making it illegal to teaching anything about evolution in that state’s public schools.  The American Civil Liberties Union convinced a high school biology teacher named John Scopes to challenge the law and teach evolution in his classroom.  He was arrested immediately which drew nationwide attention.  It was dubbed the ‘Monkey Trial’ because of the inaccurate claim that Darwin believed that humans descended from monkeys.  His defense attorney, Clarence Darrow, was the most celebrated defense attorney in America.  John Scope was found guilty of breaking the law, and fined $100 (Werner, Levy, Roberts, Taylor, pages 223-24). 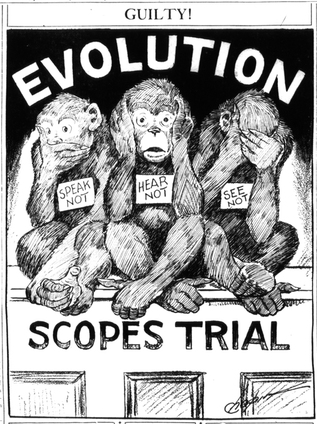 The Scopes Trial was given the nickname the "Monkey Trial' due to Charles Darwin's theory about humans descending from monkeys.  The Scopes Trial was centered around a biology teacher teaching evolution in his classroom, which was illegal at the time.  The three monkeys in this cartoon have signs saying 'speak not', 'hear not', and 'see not', which is a play on the saying, "speak no evil, hear no evil, see no evil".  The artist of this cartoon is comparing the theory of evolution to evil, which is what it was thought of at the time. 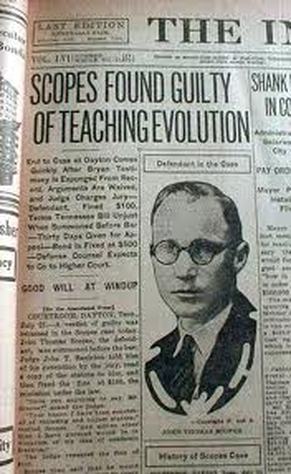 Above is a newspaper clipping regarding the Scopes Trial.  In 1925, Tennessee made it illegal to teach anything regarding Darwin's theory of evolution in schools.  However, John T. Scopes was convinced by the American Civil Liberties Union to go against the law.  He taught evolution, and was arrested. His trial brought national attention, and Scopes' defense lawyer, Clarence Darrow, traveled all the way from Chicago to Tennessee in order to defend Scopes.