Welcome! While browsing this site, you will be able to learn all about the Roaring Twenties.  The 20's were a time period full of numerous
technological advances that have influenced today’s America drastically.  Where would we be without technology?  You’ll find out information about many eras, including the Prohibition era, the era of Modernism, and the Fundamentalist era.  Fundamentalism and Modernism clashed in a historical event called the Scopes Trial.  The new technology developed in this time period brought together America like never before, as people all around the country were listening to the same songs and dancing the same dances.  There was a national sense of unity.  The growing popularity of jazz was also an important element in the 20's.  Keep browsing to learn even more about the amazing time period known as the Roaring Twenties! 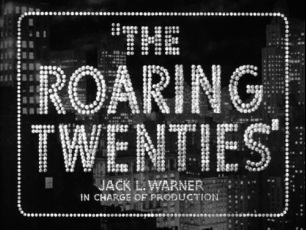 To the left is the title screen to the 1939 movie titled "The Roaring Twenties".  The movie focuses on the influential events the happened during the Roaring Twenties, some of the most influential technological advances that occurred during this time period, and just what life was like if you lived in the 1920's.  It focuses a lot on the 18th Amendment and some American's journey to get it repealed.  It highlights many of the most important occurrences in the 1920's.
This video describes the Roaring Twenties as a time of "startling contrast in American life".  It discusses the popularity of movie theaters and dancing, technological advances, and the emergence of jazz music.  The background music includes interesting pieces of jazz music that most likely were recorded in the 1920's.  This video also discusses Prohibition and shows numerous clips of the actions Americans took to fight the 18th Amendment and get their alcohol back.  Along with this, it discusses the fashion that was popular in the 20's, along with sports and games that were popular in this time period.